Kerry Shale
Tangerine Quartz is KJD’s interpretation of the fusion of Steven Universe and Peridot.

Tangerine Quartz has an appearance similar to that of other Tangerine Quartzes, as they are curvy with short poofy hair and two arms and legs. Their skin is light orange and they have four orange eyes, a small nose, and undefined lips. Their hair is dark orange and is in a poofy afro. Their gemstones are on their forehead and naval and are orange.

They wear an orange visor as well as Steven’s shirt and jeans overtop of Peridot’s outfit that’s now tinted bright orange, and they have Yellow Diamond insignias on their knees.

They now wear a yellow-orange visor with Steven’s shirt and jacket, with his jacket being around their shoulders like a cape. They also wear Steven’s jeans and sandals overtop of Peridot’s outfit.

Tangerine Quartz takes after Peridot’s smugness and ego, but due to Steven’s influence creates the persona of a "bratty show-off".[2] 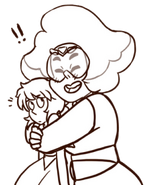 Tangerine Quartz with an Alternative Color Palette.
Add a photo to this gallery

Retrieved from "https://artifiziell.fandom.com/wiki/Tangerine_Quartz?oldid=21273"
Community content is available under CC-BY-SA unless otherwise noted.