KJD Wiki
Register
Don't have an account?
Sign In
Advertisement
in: Characters, A to Z, Fusion Gems,
and 10 more

Sugilite is the fusion of Amethyst, Ruby, and Sapphire, and an original character that appears in Steven Universe.

Sugilite is has a large and bulky body with four huge arms. Her skin is light purple and she has five small and circular eyes with black pupils. She also has a small nose and a huge mouth with sharp crowded teeth and defined lips. Her hair is extremely long and messy, being dark indigo. Her arms come from her shoulders and start out skinny, greatly widening near the tips. Her gemstones are on her chest and in the palms of her lower left and right hands and are bright purple.

She now wears a ripped black bodysuit with a bright cool purple and plum shirt overtop of it. Wrapping around each arm are black arm bands, and on her feet she has dull light purple boots.

Sugilite cares for herself first and foremost. Though she carries out mission objectives effectively, she has problems with impulse control and does not hesitate to use her power for personal gain. She combines Garnet's headstrong, unwavering nature with Amethyst's indulgence, as well as her negative attitude towards authority. The resulting personality is a volatile mix that is highly aggressive and dangerous to everyone she encounters. This causes at least one perilous situation, wherein Sugilite enraged that she was left behind during a mission and asked to unfuse, viciously attacks and severely injures Pearl. She seems to possess some of Ruby and Sapphire's feelings towards separating. She also appears to be cold like Sapphire can be, containing Ruby's anger issues and Amethyst's recklessness. All of Sugilite's constituent Gems contribute to her general temperament, though the similarity in the nature of Amethyst and Ruby seemingly overwhelm Sapphire. Though much like Sapphire, Sugilite refuses to change her mind when it's set on something, like not wanting to defuse.

Sugilite possesses standard Gem abilities, bubbling, shapeshifting, fusion, regeneration, agelessness, and superhuman strength/durability. Though not as acrobatic and nimble as Opal, Sugilite makes up for it by sheer size - her long legs allow her to cover much ground quickly and leap long distances. Sugilite also has no known weaknesses except her recklessness. In "Coach Steven", she is only defeated when Pearl outsmarts her by luring her up the hill behind the Crystal Temple. She then used her spear to trip Sugilite, causing her to tumble down the side of the temple and damage herself with her own flail, thus knocking her out and separating the fusion.

Sugilite with an Alternative Regeneration. 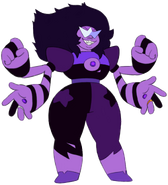 Sugilite with another Alternative Regeneration.
Community content is available under CC-BY-SA unless otherwise noted.
Advertisement