Steven Universe has a short and stocky body type with thick arms and legs. He has peach skin with two black eyes, a small nose, and his lips are undefined. He also has short very dark brown hair that is in an afro. His gemstone is on his navel and is pink.

He wore a light red shirt with a large yellow star at the center of it, and her also wore denim pants and light red sandals.

He wore a cyan shirt with a yellow star on it along with a long sleeved pink and white jacket, demon pants, and light red sandals.

He now wears a black shirt with a large yellow star on it, with the rest of his previous outfit being identical.

Steven is an optimistic, friendly, outgoing, and carefree boy with a happy-go-lucky attitude that is appreciated by many of the citizens of Beach City in one way or another. He is musically inclined, a trait he inherits from his father, with a propensity for breaking out into song and occasionally playing on his ukulele. Steven is also very kind-hearted, good-natured, and compassionate, something which Pearl notes he inherits from his mother, and he deeply loves his friends and family. He is friendly toward almost everyone he meets (even to his detriment), rarely holds grudges, and is very non-discriminatory, never treating anyone with prejudice, even towards his enemies. No matter the situation, Steven will always go out of his way to support his loved ones, even if it means putting his life on the line, and he will avoid resorting to violence. He would much rather make a compromise and choose reasoning than fighting back.

Being a human/Gem hybrid, Steven is capable of using magic, though it is unknown if he possesses all the abilities of a pure Gem, such as retreating to their gemstone when taking fatal damage. As associated with his gemstone, Steven's powers are maternal in nature and the control of his gemstone is based on emotional clarity.

Steven has shown to have some abilities of a regular Gem, but sometimes has little control of them due to not receiving enough training. He can warp using the Warp Pads and bubble objects and gemstones to be teleported to the Temple with seemingly full control. He is not strictly oxygen-dependent and is vacuum-resistant as shown in "Ocean Gem" and "Space Race". He also shows that he is able to fuse, as he can fuse with Connie to form Stevonnie. While in the beginning, they tend to fuse spontaneously when they dance and while thinking about each other, by "Beach City Drift" they fuse and re-fuse into Stevonnie at will. Furthermore, he has also been shown to be able to fuse with other Gems as well, as he first fused with Amethyst to form Smoky Quartz in "Earthlings". Steven is also capable of shapeshifting, but he has not yet learned to fully control it. His first attempt in "Cat Fingers" was disastrous, temporarily turning him into a cat monster. He has not been able to change his form entirely, but can freely shapeshift parts of his body as seen in "Too Short to Ride". His greatest feat in shapeshifting is seen in "Steven's Birthday", where he is able to use shapeshifting to make himself appear older. Despite his happy-go-lucky and cheerful attitude, he shows himself to be a competent shield fighter and is able to hold his own in most situations with his skill consistently increasing due to practice.

Due to having his mother's gemstone, he shares most of his unique abilities with her.

Steven playing with Moonstone and Connie. 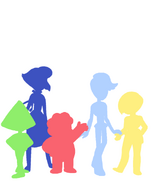 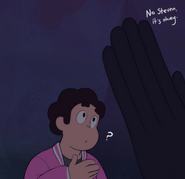 "No Steven, it's okay."
Add a photo to this gallery
Retrieved from "https://artifiziell.fandom.com/wiki/Steven_Universe?oldid=20722"
Community content is available under CC-BY-SA unless otherwise noted.