Stefan Quasar is relatively slim, and has tan skin and short jet-black hair that is shaved on the underside. His eyes have black pupils, he has a small and pointed nose, and undefined lips. He presumably has a gemstone on his navel that is black.

He wears a grey letterman vest with a puffy white collar, as well as dull blue jeans with black shoes. He also wears a black tank top with a periwinkle diamond on it, black wristbands, and a black earring on his left ear.

Nothing is known yet about Stefan's personality, but it can be assumed that even though he looks demeaning, he is kind and caring like his mother. 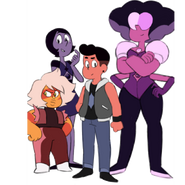 Stefan with his friends.
Add a photo to this gallery
Retrieved from "https://artifiziell.fandom.com/wiki/Stefan_Quasar?oldid=14571"
Community content is available under CC-BY-SA unless otherwise noted.