This article is about Steven and Lapis fusion. You may be looking for the fusion of Rose Quartz and Lapis.

Spirit Quartz is KJD's interpretation of the fusion of Steven Universe and Lapis Lazuli.

Spirit Quartz has an appearance similar to that of other Spirit Quartzes, as they are tall and curvy with four thin arms and a purple color scheme. They have warm purple skin, two black eyes with bushy eyebrows, a sloped nose, and undefined lips. Their hair is dark purple and depending on their regeneration is short and worn down or short and slicked back. Their arms come from their shoulders and are mostly slim. Their gemstones are on their naval and upper back and are warm purple.

Spirit Quartz takes after Lapis's laid-back personality, but is more cheeky thanks to Steven's "fun" element.[1] They are also said to give off a chill, Peter Pan-like vibe.[2] 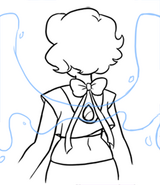 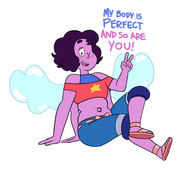 Retrieved from "https://artifiziell.fandom.com/wiki/Spirit_Quartz?oldid=16876"
Community content is available under CC-BY-SA unless otherwise noted.