Selenite is KJD's design of the hypothetical fusion of Moonstone (and, by extension, Albite and Orthoclase) and Ice.

Selenite has a thin and curvy build with four slim arms, a small and defined waist, and two long legs. Her skin is icy blue and she has four eyes that are all icy blue with black pupils and thick black eyebrows for the top pair. Her nose is small and sloped and her mouth is small with full lip. Her hair is a bright white with slightly darker blue lowlight, and it is short and messy. Her four arms all connect at her shoulders, and all have small petite hands. Her gemstones are on her sternum, chest, and naval, and are icy blue and sea foam gree.

She wears a dull blue and white tank top with dull teal arm bands on her upper pair of arms with dull blue stars on them. Her waist is blue with a small skirt that is the same colors as her tank top and are striped. She wears very light blue leggings with blue and dull blue socks that reveal her toes.

Nothing is known about Selenite's personality yet. 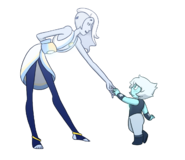 Selenite's fusion dance.
Add a photo to this gallery
Retrieved from "https://artifiziell.fandom.com/wiki/Selenite?oldid=5728"
Community content is available under CC-BY-SA unless otherwise noted.