KJD Wiki
Register
Don't have an account?
Sign In
Advertisement
in: Characters, A to Z, Pearl Fusions,
and 10 more

This article is about the Crystal Gem Sardonyx. You may be looking for another Sardonyx.

Sardonyx is the fusion of Pearl, Ruby, and Sapphire, and an original character that appears in Steven Universe.

Sardonyx has an appearance similar to that of other Sardonyxes, as she is tall and curvy with four arms and short hair. Her skin is a burgundy color, and she has four small burgundy eyes, a pointed nose, and plump lips. She has hair that is shaped like a very rounded triangle, and it is light peach in color. The top pair of her arms come from her shoulders, while the second pair come from her waist, and they’re all long and skinny. Her gemstones are on her forehead and in the palms of her upper left and right hands and are light orange.

She wears a short black and white jacket with a salmon bow tie, long white gloves, and dull plum and black pants with dull maroon shoes.

Sardonyx appears to have a combination of Garnet and Pearl's personalities, acting decidedly theatrical while also being able to keep up an intelligent conversation. Her demeanor is, for the most part, quite dramatic, as she prefers conversing with her peers in a matter similar to how a master of ceremonies would be to her audience, which fits her formal dress appearance. She seems to be snarky and witty, often laughs at her own jokes and remarks in a very pompous and comedic manner. She also seems to hold a very cheerful attitude towards almost anything as seen when she takes down the Communication Hub.

When in battle, Sardonyx is both graceful and accurate, but also powerful and rather playful, messing with her opponents or audience with tricks and jokes. Despite this, she is usually quite tactical, thinking things up before acting, to make things perfect.

Sardonyx Getting Ready to Perform. 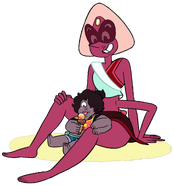 Sardonyx Sitting on the Beach with Smoky Quartz.

Sardonyx with an Alternative Regeneration.

Sardonyx with another Alternative Regeneration.
Community content is available under CC-BY-SA unless otherwise noted.
Advertisement