This article is about the Crystal Gem Sapphire. You may be looking for another Sapphire.

Sapphire is a Crystal Gem, and an original character that appears in Steven Universe. She is currently fused with Ruby as Garnet.

Sapphire has an appearance similar to that of other Sapphires, as she is short and thin with one eye. She has a cool blue complexion with one large blue eye with a black pupil, no nose, and defined lips. Her hair is light blue and is long and voluminous, having a poofy texture. Her gemstone is in the palm of her right hand and is blue.

She wore a dull navy blue and royal blue dress with a blue accent along with circular white shoulder pads and gloves.

Sapphire is very compassionate, fair and level-headed as well as patient. She balances out Ruby's much more impulsive personality when they are fused as Garnet. She is shown to be quick to understand a puzzle or situation, as she came to the conclusion of Steven's immunity to the energy field almost immediately. This trait is also shown in "Gem Heist" when Sapphire is able to quickly come up with a plan to enter Pink Diamond's Zoo undetected.

Sapphire usually appears cold and distant to others, a trait that is mostly reflected by Garnet. This is because she possesses precognition and can see the resolution of events before they have happened. As shown in "Keystone Motel", she just wants to do what she believes is right, which is to face problems by acting as though they have already been resolved, as she sees them in the future. Because of this, she has trouble letting out her emotions in the present, because she already sees the futures where these emotions have been resolved, opposite to Ruby, who lives in the moment and is more open about her emotions. Sapphire's blasé attitude to the present can make her appear somewhat passive-aggressive as well. But between Ruby and Sapphire, she is also shown to be more social, willing to start a conversation with Ruby about her thoughts about the Earth (shown in "The Answer"). When in a confusing and distressing situation, she lets out more emotion contrasted to Ruby, as Garnet's left eye begins crying in the episode: "So Many Birthdays". This also causes her to figuratively and literally freeze up as ice begins to encase her and she is unable to move or think as seen in both The Answer and That Will Be All.

For the history of Sapphire, visit here. 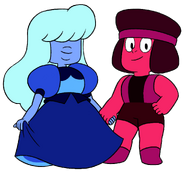 Sapphire standing with Ruby, both having possible regenerations.

Sapphire hanging out with Ruby and Frankie Universe. 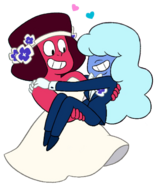 Some possible Ruby and Sapphire regenerations. 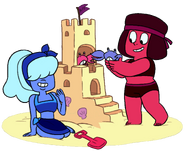 Ruby and Sapphire playing in the beach.
Add a photo to this gallery
Retrieved from "https://artifiziell.fandom.com/wiki/Sapphire?oldid=15733"
Community content is available under CC-BY-SA unless otherwise noted.