This article is about the Homeworld Gem. You may be looking for another Rose Quartz.

Rose Quartz is a Homeworld Gem, and an original Gemsona created by KJD.

Rose Quartz has an appearance similar to that of other Rose Quartzes, as she is tall and bulky with a pink color pallet. Her skin is deep pink and she has dark pink eyes with black pupils, pink eyeshadow, a sloped nose, and full lips with pink lipstick. Her hair is light pink and is short and messy, having a slight curl. Her gemstone is on her left forearm and is pink.

She wears a standard Homeworld uniform that’s tinted pink with a Pink Diamond insignia on her chest.

Nothing is known about Rose Quartz's personality yet. 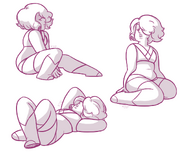 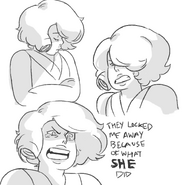 "I guess I really am completely alone now".
Add a photo to this gallery

Retrieved from "https://artifiziell.fandom.com/wiki/Rose_Quartz_(Forearm_Gem)?oldid=12053"
Community content is available under CC-BY-SA unless otherwise noted.