This article is about the canon fusion. You may be looking for another Rhodonite.

Rhodonite is the unaligned, voluntarily permanent fusion of an unknown Ruby and Pearl who made her debut in "Off Colors". Her components once belonged to a Morganite, but were replaced after it was discovered that they liked to fuse. She then would travel through space onboard the Sun Incinerator with the rest of the Off Colors, before landing in Beach City in the episode, "Change Your Mind". After the events of "Little Graduation", she and the rest of the Off Colors have returned to space.e.

Although her components are still unknown, KJD has drawn her interpretation of what they might look like, Pink Pearl and Ruby (navel gem).[1]

Rhodonite has a somewhat muscular build that resembles Garnet's, with pink skin and a long pointed nose that is slightly turned upward. She has wide, black, afro-style hair with mauve highlights. As a fusion, Rhodonite has four arms, a pair of which are thick and muscular, like a Ruby's, and a pair on her waist that is thin, like a Pearl's. She wears a black and mauve jumpsuit with a diamond-shaped cutout at the navel, revealing her Ruby gem, and mauve leggings, with one leg that covers her entire right leg and the other only covering part of her left thigh. She has a black ballet flat on her right foot and a mauve boot on her left. She also wears a sheer pink shawl over the Pearl gem on her chest and has deep burgundy gloves from the elbow-down on her lower set of arms. She also possesses four eyes that are reminiscent of Rainbow Quartz, with the top pair being wide and expressive like a Pearl's but having dark pupils like a Ruby, and the bottom pair being more closed and reserved and having light-colored pupils like a Pearl (also resembling Rose's eyes on Rainbow Quartz).

Her outfit and hair design, looking like a mash-up of her constituent Gems' appearances rather than an even mix, are reminiscent of how Garnet looked when she first formed.

Rhodonite is shown to stress out a lot, and she is easily frightened. She is also extremely paranoid, possibly due to the eons spent hiding inside the underground Kindergarten on Homeworld. However, Rhodonite is also very kind and can be level headed at times.

Her panic and anxiety get in the way of her job as head of strategic operation in the Off Colors, as she'll more often than not discard options for being too risky. However, one can argue that this also has a silver lining, keeping a defensive look over the team.

Rhodonite makes her first appearance in "Off Colors". As the Rutile Twins were taking Steven and Lars to an underground Kindergarten, she appears along with Padparadscha and Fluorite. When explaining how she is "off colored" to Steven and Lars, she reveals she once belonged to a Gem called Morganite.

She witnesses Lars' transformation and aids in the Kindergarten's isolation. She gets shocked when learning that Earth still exists and hasn't been decimated and takes interest in travelling there with Steven and Lars. She ends up staying at the Kindergarten with Lars and the other Off-Colors.

Rhodonite seems curious of Steven, then befriends him later in the episode. She often somewhat blames Steven for the Gem-shattering Robonoids that are looking for Steven and Lars.

Rhodonite likes Lars, as he saved her from the shattering Robonoids. She is also very curious of him after Steven revived Lars in "Lars' Head". When Lars offered to send her to Earth she acts awkwardly and goes for it only to be stopped by Fluorite and the Rutile Twins.

Rhodonite seems to have a mother-daughter relationship with Padparadscha due to the smaller Gem being rather not in tune with the world around her and is very distracted. It also appears that Rhodonite may be slightly annoyed by Padparadscha's late predictions.

Rhodonite treats Fluorite like a mother and respects each of her wishes. It also appears that Rhodonite may be slightly annoyed by Fluorite's slow speech.

Rhodonite and the Rutile Twins did not interact much yet, but from what was seen, they seem to have at least a mutual respect for each other.

Rhodonite (and her components) used to work for a Morganite until she caught them fusing and replaced them. 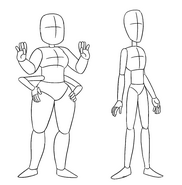 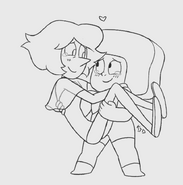 Pink Pearl And Ruby
Add a photo to this gallery

Retrieved from "https://artifiziell.fandom.com/wiki/Rhodonite_(Canon)?oldid=10753"
Community content is available under CC-BY-SA unless otherwise noted.