KJD Wiki
Register
Don't have an account?
Sign In
Advertisement
in: Characters, A to Z, Fusion Gems,
and 11 more

This article is about the Steven Universe Fusion. You may be looking for another Pietersite.

Pietersite is KJD's interpretation of the fusion of Pearl, Steven Universe, Ruby, and Sapphire.

Pietersite has an appearance similar to that of other Pietersites, as they are tall and slim with three pairs of arms and a stormy design. They have a tall, cloud-shaped head with a lighter-colored steak shaped like a lightning bolt, dull purple skin, black lipstick, and four light purple eyes covered by a black theater mask. Their arms and legs have circular bumps at the joints and come from their shoulders, ribs, and waist. Their gemstones are located on their forehead, navel, and upper palms and are purple, red, and black.

They wear Steven’s shirt as an ascot around their neck, accompanied by a dark navy blue crop top with a red tuxedo collar, pointed shoulder pads, and red trims on the ends of the sleeves. Steven's pants are seen on their middle left hand, and they wear dark navy blue shorts with red trimming, matching red ballet flats, and knee-length dark navy blue socks.

Pietersite is described as being "silly and theatrical", using over-the-top body language and expressions to make up for their lack of a voice.[1]

Pietersite Showing off their Slapstick. 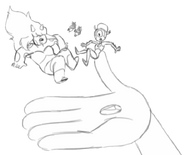 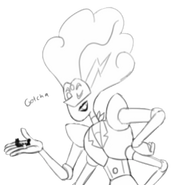