This article is about the Crystal Gem Pearl. You may be looking for another Pearl.

Pearl is a Crystal Gem, and an original character that appears in Steven Universe

Pearl has an appearance similar to that of other Pearls, as she is tall and thin with a pointy nose. Her complexion is ivory and she has two large light cyan eyes, a prominent pointed nose, and undefined lips. Her hair is light salmon and is in a short and pointy pixie cut. Her gemstone is on her forehead and is very light pink and white in color.

She wore a sleeveless light cyan and pink short bodysuit that had a very small yellow star on it.  She also had a short and frilly transparent light green skirt with light cyan ballet flats and light green socks.

She wore a dull cyan shirt sleeveless dress with a yellow star on it,  a cyan waistband, dull dandelion shorts, and light cyan ballet flats with light pink socks,

She now wears a teal sleeveless crop top with a boxy cyan jacket that is light pink on the inside, and she also wears dull navy blue capri leggings and light pink ballet flats.

Pearl is a perfectionist with a sizable amount of knowledge on a plethora of topics and values organization. Pearl has a penchant for symmetry (going so far as to impale M.C. Bear Bear to maintain the symmetry of a pile of appliances and school supplies) and high attention to details.

Despite her perfectionism and occasional bragging, Pearl suffers from low self-confidence and self-esteem. In "Friend Ship", she admits she is very dependent on others to validate her, which loops into a strong inferiority complex. According to Amethyst in "Reformed", she needs everyone's constant approval to feel secure. Without anyone to tell her what to do or to depend on her, Pearl feels lost and without meaning or value. Pearl admits she often feels extremely weak and/or useless when compared to others who appear better than her, going so far as to describe herself as ineffective on her own; always in need of a leader she can follow. Her self-destructive behavior stems from the Homeworld caste values, where pearls are viewed as property rather than Gems. This has led her to take drastic actions in order to prove herself — though, thanks to Garnet's encouragement in "Friend Ship", she has started to take initiative instead of letting others' words define Pearl herself. It appears Pearl has taken this to heart, as she asserted herself against Peridot when she treated Pearl in a degrading tone. Pearl even went as far as physically punching Peridot to show that she was an individual, not a piece of property.

Pearl is easily flustered and overwhelmed when confronted by the unknown or when her plans fail, which can lead to her judgement being clouded or cause her to act on impulse instead of rational thinking. Her inner turmoil over her love for Rose (and her subsequent absence) has made Pearl lash out at Steven more than once. Her fierce desire to feel "strong" and have more victories as a Crystal Gem even caused her to betray Garnet's trust and basic principles so they could keep forming Sardonyx. When realizing how much she hurt others, Pearl will apologize and try as hard as she can to set things right, working hard in order to counteract the damage she may have inflicted.

Out of all the Crystal Gems, Pearl is the most poorly adjusted to life on Earth, being unaware of human social conventions and culture, such as jokes, games, arcades, food, and birthday parties. Pearl has expressed a great desire to leave Earth in "Space Race", going so far as to risk her and Steven's lives. Pearl also has a pessimistic view of humanity, as evidenced by her statement in "Keep Beach City Weird".

In spite of her pessimistic perspective of humans, Pearl is extremely dedicated to her cause in protecting humanity more or less out of her love, loyalty, and admiration for Rose Quartz. She does, however, find certain aspects of Earth rather amazing. Regardless of her poor understanding of human society, she was able to pay for the Cookie Cats Amethyst and Garnet stole in "Gem Glow", drive Greg's van in "Ocean Gem", and repair it in "House Guest". She also watches the New Year's Eve fireworks show in "Maximum Capacity".

In "Back to the Barn", it is revealed that Pearls are not created to fight, but respond to orders. However, Pearl trained to fight with Rose. Peridot also describes her kind, Pearls, as accessories that are meant to be put on display as status symbols and to perform menial tasks, although Pearl's appearance fits this standard. 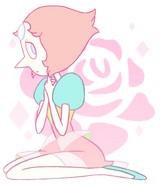 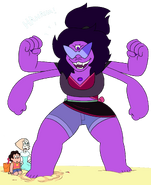 The Crystal Gems in hypothetical regenerations. 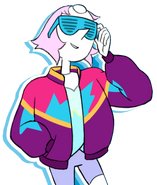 The “Crystal Aunts”.
Add a photo to this gallery

Retrieved from "https://artifiziell.fandom.com/wiki/Pearl?oldid=15930"
Community content is available under CC-BY-SA unless otherwise noted.