Peach Aventurine is the hypothetical fusion of Moonstone (and, by extension, Albite and Orthoclase) and Jasper.

Peach Aventurine has a curvy and lanky body with four arms, a large bust, long torso, and very long legs. Her skin is peach with lots of light peach stripes and markings, and she also has four peach eyes with black pupils. She also has no nose (with her gemstone acting as a nose) and a small mouth with full lips and lots of sharp teeth. Her hair is very light peach and is rather long and somewhat messy. Her arms come from her shoulders and hips and are long and lanky, having clawed hands. Her gemstones are where her nose would be, chest, and naval and are light peach and white.

Peach Aventurine has an animalistic personality, and barely speaks.[3] 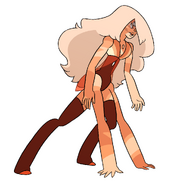 Peach Quartz’s jaw unhinging.
Add a photo to this gallery

Retrieved from "https://artifiziell.fandom.com/wiki/Peach_Aventurine?oldid=10380"
Community content is available under CC-BY-SA unless otherwise noted.