This article is about the Fusion Gem Opalite. You may be looking for another Opalite.

"F**k Em' Only We Know" by Banks (Instrumental)

Claire Boucher (doubled up)
Opalite is the hypothetical fusion of Moonstone (and, by extension, Albite and Orthoclase) and Pearl.

Opalite has a skinny body with two heads, a wide chest, and long arms and legs. Her skin is light blue and she has eight light blue eyes with black pupils, with one pair being on the back of her heads. She also has a sloped and pointed nose and two mouths with full lips. Her hair is light cool pink and is short and messy, being shaved in the back. Her heads sprout from separate necks and sit beside each other. Her gemstones are on her chest, naval, and on the forehead of her right head and are white, pink, blue, purple, and yellow in color.

Opalite is described as really indecisive and changes her train of thought easily. Her mannerisms are very graceful and delicate but when interacting with others she's quiet and a bit awkward.[3]

Opalite isn't super stable, that comes from a personality clash with her components rather than any kind of emotional conflict.[3]

Pearl wouldn't feel like a third wheel while fused as her, they would just have a little trouble getting on the same wavelength. Sometimes you can have a good relationship with someone without completely understanding them, and that's what Opalite represents.[4]

Pearl and Moonstone would get along fine, but they have somewhat differing personalities and ideals. Their fusion doesn't reflect a bad relationship as much as the idea of having a fine relationship with someone but not necessarily “being on the same page”.[5] 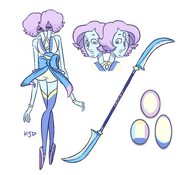 Retrieved from "https://artifiziell.fandom.com/wiki/Opalite?oldid=18645"
Community content is available under CC-BY-SA unless otherwise noted.