KJD Wiki
Register
Don't have an account?
Sign In
Advertisement
in: Characters, A to Z, Pearl Fusions,
and 6 more

This article is about the Crystal Gem Opal. You may be looking for another Opal.

Opal is the fusion of Amethyst and Pearl, and an original character that appears in Steven Universe.

Opal has an appearance similar to that of other Opals, as she is tall and curvy with four slim arms and long hair. Her skin is lavender and she has long ivory hair that is styled into a ponytail, two light blue eyes with dark indigo pupils, a pointed nose, and full lips. Her gemstones are on her forehead and chest and are light blue, salmon, yellow, and lavender.

She wore a sleeveless dull teal and light cyan dress with a yellow star on it, dull orchid leggings, and light yellow socks.

Amethyst and Pearl are extremely powerful when they are willing to work together in the form of Opal. Amethyst's ability to live in the moment along with Pearl's obsessive single-mindedness results in a stable fusion. Opal achieves a peace in that balance that Amethyst and Pearl rarely experience on their own. At times, Opal is so calm and at peace that it causes her to forget the task at hand, such as forgetting to retrieve the Heaven Beetle after rescuing Steven.

The balance that holds Opal together is, by far, the thinnest of all the other known fusions. The ease with which Opal can separate is very different from that of Garnet, who is almost impossible to unfuse except under extreme emotion or by force (Ruby and Sapphire can willingly separate anytime they wish). If Pearl and Amethyst have conflicting views while fused, this can cause Opal to revert to her constituent Gems; the slightest dissonance between the two poses a danger of involuntary defusion.[1]

Opal's personality is theorized to be a combination of Amethyst's power, along with Pearl's grace and decisive determination. She appears to be more open to Steven's desire to have fun and play, as she sang part of his song back to him. This is a trait that can be traced back to Amethyst.

In "Fusion", Opal shows both of Pearl and Amethyst's personalities by posing with elegant and silly poses.

A hypothetical regeneration of Opal.

Opal dressed up as Purple Puma.

What Opal may have looked like if formed in the past.

Opal rocking out with Steg.

Opal in her wedding attire.

If found return to Opal Part 1.

If found return to Opal Part 2.

If found return to Opal Part 3.

Opal getting ready for a day at the beach.

Opal drawn one the Pilot Style. 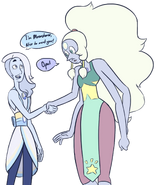