This article is about the Steven Universe fusion. You may be looking for another Lavender Quartz.

Lavender Quartz is the hypothetical fusion of Moonstone (and, by extension, Albite and Orthoclase) and Steven Universe.

Lavender Quartz has an appearance similar to that of other Lavender Quartzes, as they have a tall and curvy body with two arms and four legs. Their skin is lilac and they have four purple eye, with two being on their face and the rest being on the back of their head and having navy blue sclera. They also have a sloped and rounded nose and full lips. Their hair is dark purple and is short and messy, being shaved in the back. Their legs split at the knees and create four legs, all of which are thick and muscular. Their gemstones are located on their chest and navel and are purple in color.

They wear Steven’s shirt and jeans overtop of a purple, white, and dark purple tank top, and they also have dark purple pants on their front set of legs only, having cutouts at the thighs, heels, and toes.

Lavender Quartz is normally calm and collected but can be brutal in a fight. 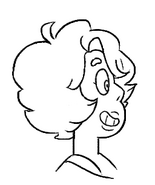 A side view of Lavender Quartz. 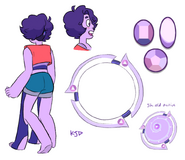 Retrieved from "https://artifiziell.fandom.com/wiki/Lavender_Quartz_(Steven)?oldid=17666"
Community content is available under CC-BY-SA unless otherwise noted.