Lapis Lazuli is a Crystal Gem, and an original character that appears in Steven Universe.

Lapis Lazuli has an appearance similar to that of other Lapis Lazulis, as she is tall and slim with short hair and water wings. She has bright blue skin along with two large dark navy blue eyes, a small pointed nose, and undefined lips. Her hair is royal blue and is short and ratter messy. Her gemstone is on her upper back and is blue.

She wore a blue sleeveless crop top with a matching skirt, and on them is a large Blue Diamond insignia.

While she is playful and friendly with Steven Universe, Lapis Lazuli is bitter and mistrusting towards the Crystal Gems, believing they care more about the Earth than their own kind, likely due to their being unaware for so many years about her captivity in a mirror.

When confronted with an enemy more powerful than herself, she displays a pacifistic approach. She believes that putting up a struggle can only make the situation worse. In "The Message", she delivers a frantic message to Steven about the approaching invasion, begging him not to put up a fight. In "Jail Break", she gives similar advice when Steven stumbled across her, mentioning Homeworld might go easy on them if they follow orders. However, Lapis can change into an aggressive being if necessary.

She expresses an overwhelming desire to return home, going as far as to use one of the Earth's oceans to create a giant water construct for the purpose of using it as a lift in order to get closer. In doing so, she shows that she can be rather inconsiderate and indifferent, as she does not care about the human race or the Earth. Overall, Lapis is a passionate Gem who doesn't hesitate to fight anyone who stands against her, but is thankful to Steven for releasing her and then healing her gem after all that she did to him. Lapis is also portrayed as being a martyr, loyal to Steven and willing to suffer if it means protecting him from Jasper or any danger in addition to Malachite.

However, she is also shown to be very stubborn and hesitant in cooperating or accepting help from others unless she has no other choice, seen in both "Jail Break", when she refuses to be set free by Steven, and "Chille Tid," where she is reluctant to give the Crystal Gems her location for them to find her and aid in the situation.

For the history of Lapis Lazuli, visit here. 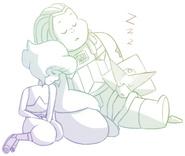 Lapis Napping with Peridot and Bismuth.

Lapis with an Alternative Regeneration. 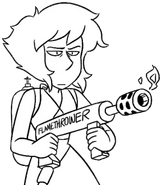 Lapis’ Reaction to Meeting Grandidierite.
Add a photo to this gallery
Retrieved from "https://artifiziell.fandom.com/wiki/Lapis_Lazuli?oldid=22383"
Community content is available under CC-BY-SA unless otherwise noted.