This article is about the Fusion Gem Kyanite. You may be looking for another Kyanite.

Kyanite is KJD’s interpretation of the fusion of Aquamrine and Lapis Lazuli.

Kyanite has a slim body with four arms and two mouths. Her skin is half blue and half cyan, and she has four dark blue eyes, a sloped and pointed nose and two mouths that both have undefined lips. Her hair is blue and is short and messy. Her arms are slightly thick and split at the elbows to create four arm. Her gemstones are on her left cheek and upper back and are blue.

She wears a blue and dark blue dress with multiple Blue Diamond insignias on it along with white leggings and very dark blue ballet flats with ankle straps.

Nothing is known about Kyanite’s personality yet. 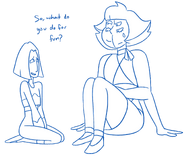 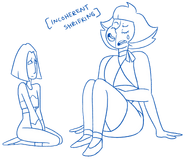 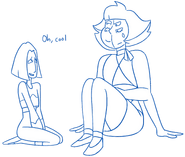 “Oh, cool”.
Add a photo to this gallery
Retrieved from "https://artifiziell.fandom.com/wiki/Kyanite?oldid=16726"
Community content is available under CC-BY-SA unless otherwise noted.