This article is about Skinny Jasper. You may be looking for another Jasper.

Jasper, nicknamed Skinny, is a Homeworld Gem, and an original character that appears in Steven Universe.

Skinny Japser has an appearance similar to that of other Jaspers, however as she is defective she is slimmer than other Jaspers. She has light orange skin with red-orange markings, light orange hair, light yellow-orange eyes, and defined lips. Her gemstone is located on her navel and is yellow and orange in color.

She wears a standard Homeworld uniform that’s tinted blue with a Blue Diamond insignia on her chest.

Skinny Jasper has an easygoing personality. Skinny has a sharp and sarcastic sense of humor, joking that the Amethysts are "cliquey" and constantly talk about the Prime Kindergarten, with the other members of the Famethyst.

For the history of Skinny Jasper, visit here. 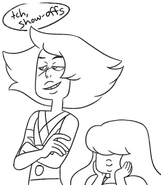 Skinny Jasper impressing Sapphire.
Add a photo to this gallery
Retrieved from "https://artifiziell.fandom.com/wiki/Jasper_(Skinny)?oldid=16754"
Community content is available under CC-BY-SA unless otherwise noted.