This article is about Imperial Topaz. You may be looking for another Topaz.

Imperial Topaz is KJD’s interpretation of the fusion of Emerald and Hessonite.

Imperial Topaz has a slim body with wide shoulders, a small waist, and four arms. Her skin is dark yellow-orange and she has a large and spiky brown unibrow that goes over her one black eye and two dandelion eyes with black pupils. She also has a sloped nose and a mouth with full lips and sharp teeth. Her hair is dandelion and is short and poofy. Her arms come from her shoulders and are long and thin. Her gemstones are on her right eye and chest and are yellow and gold.

She wears a very boxy bright dandelion cape with a Yellow Diamond insignia on it, and underneath that she wears a dark and darker yellow dress with ivory gloves. 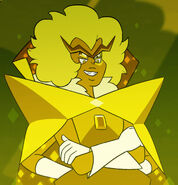 Imperial Topaz looking menacing as always.
Add a photo to this gallery
Retrieved from "https://artifiziell.fandom.com/wiki/Imperial_Topaz?oldid=16260"
Community content is available under CC-BY-SA unless otherwise noted.