Fire Quartz is KJD's interpretation of the fusion of Steven Universe and Ruby.

Fire Quartz has an appearance similar to that of other Fire Quartzes, as they have a muscular thick build with a warm color scheme. Their skin is red-orange and they have two eyes, a small nose, and undefined lips. Their hair is normally black but when fired up is orange and red, resembling fire. Their arms come from their shoulders and below and are thick and muscular. Their gemstones are on their naval and upper left palm and are red and orange.

They now wear Ruby's silver wedding ring on their nose as well as Steven's shirt, jacket, and jeans, and dark red boots.

They are described as silly and hotheaded, but also over the top. 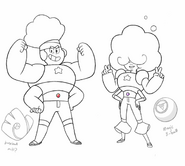 Original sketch of Fire Quartz together with Druzy Quartz.

Fire Quartz with their hair on fire.
Add a photo to this gallery
Retrieved from "https://artifiziell.fandom.com/wiki/Fire_Quartz?oldid=17894"
Community content is available under CC-BY-SA unless otherwise noted.