This article is about the Crystal Gem Enstatite. You may be looking for another Enstatite.

Enstatite is KJD’s interpretation of the fusion of Ruby, Sapphire, and Peridot.

Enstatite has an appearance similar to that of other Enstatites, as she is tall and curvy with four slim arms and a warm color pallet. Her skin is yellow-orange and she has five orange eyes with black pupils, a small nose, and full lips. Her hair is red-brown and is very wide. Her arms split at the elbows and are thin. Her gemstones are on her forehead and in the palms of her upper left and right hands and are dark orange.

She wore a transparent orange visor with a red-orange, orange, brown, and black short with a Yellow Diamond insignia on it. She also had black gloves, red-brown leggings, and tall black boots with orange accents and platforms.

Nothing is known about Enstatite’s personality yet. 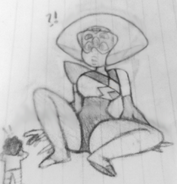 Concept ideas KJD’s had for Enstatite’s design.
Add a photo to this gallery

Retrieved from "https://artifiziell.fandom.com/wiki/Enstatite?oldid=16713"
Community content is available under CC-BY-SA unless otherwise noted.