This article is about Dragon Vein Agate. You may be looking for another Agate.

Jessie J
Dragon Vein Agate is the hypothetical fusion of Moonstone (and by extension, Albite and Orthoclase) and Garnet.

Dragon Vein Agate is slim and tall with four arms, a long waist, and very long legs. Her skin is magenta and she has purple and dark pink stripes all over her body. She has seven eyes that aren't shown, a small nose, and two mouths, one being on the back of her head. Her hair is very dark violet and is short and messy, being shaved in the back. Her arms come from her shoulders and are long and thin. Her gemstones are on her chest, naval, and upper palms and are dark pink and purple.

She wears a plum visor as well as a boxy white shirt with purple accents. Her top pair of arms have dark pink and purple arm bands, and she also wears a matching waistband. For pants she wears purple leggings that cover her feet, with dark pink tipped toes and light pink heels.

Dragon Vein Agate is a little smug, and in love with herself actually. She doesn't talk a lot but is friendly when she does and most of the time keeps herself pretty composed.[2] Dragon Vein Agate isn't super stable but she's not completely unhinged either. She's made of two stable fusions that are in solid romantic relationships so she stays together pretty well. KJD stated that it's her personality that can get a little extreme.[3]She's relatively stable, more so than Alexandrite and Sugilite but slightly less so than Sardonyx.[4] 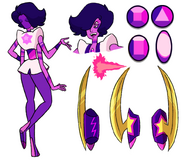 Dragon Vein Agate unfusing.
Add a photo to this gallery

Retrieved from "https://artifiziell.fandom.com/wiki/Dragon_Vein_Agate?oldid=21402"
Community content is available under CC-BY-SA unless otherwise noted.