Devillineis KJD’s interpretation of the fusion of Yellow Pearl and Aquamarine.

Devilline has a tall, slim build with two arms, a small chest, and an unknown amount of legs. Her skin is bright turquoise and she has four dark teal eyes, a pointed nose, and undefined lips. Her hair is dark teal and is styled in a bob that angles upward. Her arms come from her shoulders and waist and merge at the elbows. Her gemstones are on her left cheek and chest and are teal and light teal.

She wears a teal and dark teal shirt with light and lighter teal shoulder pads with scalloped edges, and she also wears dark teal flared arm bands on her wrists.

She is described as being snarky and rude, much like her components. 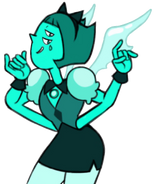 Devilline posing
Add a photo to this gallery
Retrieved from "https://artifiziell.fandom.com/wiki/Devilline?oldid=16602"
Community content is available under CC-BY-SA unless otherwise noted.