KJD Wiki
Register
Don't have an account?
Sign In
Advertisement
in: Groups, A to Z, Teams, Characters

The Crystal Gems, also referred to as the Rebels, are a group of Gems established by Rose Quartz who, unlike the rest of their kind, seek to protect the Earth instead of exploiting it and are the self-proclaimed guardians of humanity. Their title as the "Crystal Gems" distinguishes them from the Homeworld Gems

Much of the history of the Crystal Gems is shrouded in mystery. What is known is that several thousand years ago, Homeworld Gems arrived on Earth and created the "Kindergarten", a facility used to mass-produce new Gems via Injectors. This process was very invasive and damaging to the planet; the gestating Gem draining the life force out of the surrounding area in order to grow. According to Pearl, if this process was allowed to continue, the present Earth would be a lifeless, barren wasteland. Rose Quartz's empathy towards the Earth and beliefs on the Kindergarten's injustice instigated a rebellion fought by those who would become known as the Crystal Gems. Little is known about the ensuing war, simply known as the Rebellion, other than that it ended with all but a few of Rose's closest friends being destroyed, and the Homeworld Gems being driven off Earth, which was then cut off from Gem-controlled space by destroying the Galaxy Warp. For about 5,500 years, the remaining Crystal Gems have used their abilities to defend Earth from countless Gem based threats. However, Rose, as a great admirer of humanity, gave up her physical form to give birth to a half-human child, Steven Universe. The other remaining Crystal Gems, Garnet, Amethyst, and Pearl, have taken it upon themselves to raise alongside Greg and teach him how to use his powers. 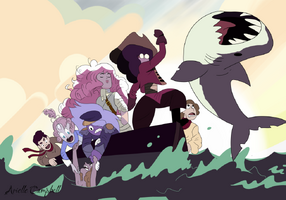 In "On the Run", it is revealed that Pearl and Garnet originally came from the Gem Homeworld, while Amethyst was formed on Earth in the Prime Kindergarten.

Despite being defeated thousands of years ago, the Homeworld Gems have shown renewed interest in Earth, first sending the Red Eye (which was promptly destroyed) to scan for surviving Gems and, as of "Warp Tour", sending one of their engineers Peridot and her robonoids to fix the Galaxy Warp, as well as reactivate dormant Gem technology left on Earth, such as the Facet Five in "Marble Madness" to check on the Cluster.

Rose Quartz and Pearl were shown to be the original members of the Rebellion as told in "The Answer". Before Garnet joined the Crystal Gems the Rebellion has been happening for quite some time, enough for Pearl to gain a reputation as "terrifying and renegade" and that the service of a seer Sapphire was required. When Ruby was slated to be executed due to changing the future and letting the traitors escape, Sapphire saved her and the two of them decided to be Garnet and join the Crystal Gems. Sometime after the war, Amethyst was found and taken in as a member. Rose Quartz eventually gives up her physical form to bear a half human, half Gem being named Steven Quartz Universe. Peridot, a Gem loyal to Homeworld, betrays her superior Yellow Diamond in "Message Received" as Peridot believes Yellow Diamond is too irrational. This action allows Steven to dub Peridot a Crystal Gem with Garnet, Amethyst and Pearl agreeing.

The following is the Manifesto of Rose Quartz, revealed by Pearl in The Guide to the Crystal Gems:

"Fight for life on the planet Earth,

Defend all human beings, even the ones that you don't understand,

Believe in love that is out of anyone's control,

And then risk everything for it!"