KJD Wiki
Register
Don't have an account?
Sign In
Advertisement
in: Characters, A to Z, Fusion Gems,
and 9 more

This article is about the Fusion Gem Charoite. You may be looking for another Charoite.

Charoite is KJD’s interpretation of the fusion of Ruby, Sapphire, and Lapis Lazuli.

Charoite has a tall and slim body type with four slim arms, a small waist, and long and skinny legs. Her skin is purple and she has five purple eyes with black pupils, a small nose, and full lips. Her hair is very dark indigo and depending on her regeneration is either short and rounded or short and pointed upward with four main points. Her four arms come from her shoulders and upper back and are long and slim. Her gemstones are on her upper back and upper palms and are dark purple.

She now has differently shaped hair that has points instead of being rounded and symmetrical, and she wears a very light blue visor that covers all her eyes. She wears a black, purple, and light purple shirt with pointed very dark purple shoulder pads, a star-like design, and black arm bands on all four of her arms. She also wears very dark purple leggings that are light purple in the inside, and tall black sandals.

Nothing is known about Charoite’s personality yet. 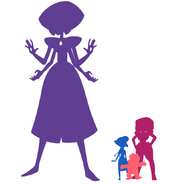 Charoite's size compared to her component Gems and Steven. 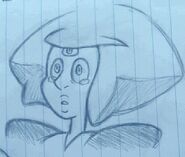 Charoite without her visor, crying