This article is about the Fusion Gem Cavansite. You may be looking for another Cavansite.

Cavansite is the fusion of Off Color Lapis Lazuli and Off Color Aquamarine, and an original character created by KJD.

Cavansite has a curvy body with two water arms, a small waist, and curvy legs. Her skin is light blue and she has three blue eyes with dull indigo eyeshadow, a small sloped and pointed nose, and undefined lips. Her hair is blue with light blue lowlights and is styled in a somewhat poofy bob. She does not have true arms, instead having constructs made of water that function as arms. Her gemstones are located on her left and right shoulders and are blue in color.

KJD describes Cavansite as being like "a snarky-but-cool older sister".[1] 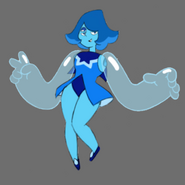 Retrieved from "https://artifiziell.fandom.com/wiki/Cavansite?oldid=17568"
Community content is available under CC-BY-SA unless otherwise noted.