Marina Sirtis
Blue Lace Agate is the hypothetical fusion of Moonstone (and, by extension, Albite and Orthoclase) and Holly Blue Agate.

Blue Lace Agate is a tall and curvy fusion with two sets of arms, a flat chest, large hips, and four curvy legs. Her skim is very light blue with lots of wavy light blue lines, and her eyes are very light blue with navy blue cleats, and two of her eyes are on the back of her head. She also has a sloped and slightly pointed nose and full lips. Her hair is white with stripes of light blue and periwinkle, and it’s in an off center bun. Her arms come from her shoulders while her legs come from her hips, and they’re all long and curvy. Her gemstones are on her chest, navel, and on the back of her head and are light blue and white.

Blue Lace Agate has a bipolar kind of personality, in a way that her personality kind of has the two different extremities she moves between.[2] 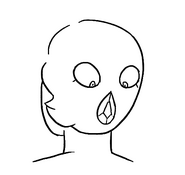 Retrieved from "https://artifiziell.fandom.com/wiki/Blue_Lace_Agate?oldid=21403"
Community content is available under CC-BY-SA unless otherwise noted.