This article is about Apatite. You may be looking for another Apatite.

Apatite is KJD's interpretation of the fusion of Lapis Lazuli and Holly Blue Agate.

Apatite has a tall body with two arms, a long torso, and four long and curvy legs. Her skin is light blue and she has four deep periwinkle eyes with black pupils, a sloped and pointed nose, and full lips. Her hair is deep periwinkle with periwinkle and light periwinkle striped accents, and it is styled in an updo that is wide and narrow. Her four legs all connect at her hips and are as mentioned long and curvy. Her gemstones are on the back of her head and upper back and are cool blue.

She wears a royal blue bodysuit with a blue and navy blue shawl, and her bodysuit has cutouts on all her feet exposing her toes.

Nothing is known about Apatite’s personality yet. 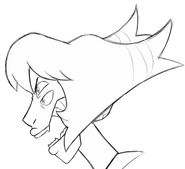 Apatite unhinging her jaw.
Add a photo to this gallery
Retrieved from "https://artifiziell.fandom.com/wiki/Apatite?oldid=17237"
Community content is available under CC-BY-SA unless otherwise noted.